Winter has been slow to release its grip on us here on the north Olympic Peninsula. Rain, snow, rain, snow, freeze, thaw, drip, drip, drip . . .

But every few days since the spring solstice we are getting a bit milder weather, more sunshine. The days are longer, everything is green and blooming, the herring have spawned. And the salmon fry are out and about in the shallow water along our beaches. There's still bound to be some few cutthroat spawning in our area creeks too. Especially with all of this rain lately. But there's also quite a few nice robust trout out and about, and feeding on the fry. 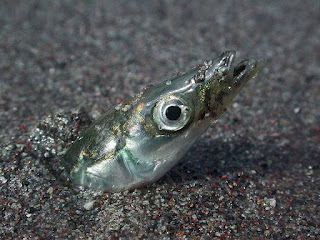 Sandlance are an important forage for the sea-run coastal cutthroat trout.


It's time to get out there on the beaches and try to remember how to cast. For the next few months you will find that the trout are feeding heavily on salmon fry, and other forage. Some of your flies should be quite small. Fry patterns can be useful from barely an inch to over 1-1/2 inches right now. By May they can be two inches or longer. Around here the herring will be quite small in May, and they seem to hug the shorelines, as does much of the prey species this early in the year. They will tell you that "a big fly will catch a big fish." But we do catch a lot of nice, bigger, sea-runs on size 12 dry flies and smaller shrimp, krill, and other patterns. A #12 to #10 Scud fly, in olive, tan or grey, can be fatal at times. Use these to imitate the "beach hoppers" that are all over the beaches and in the shallows. especially on a cloudy or overcast day. The hoppers like low light conditions. Trout will feed at the edges, in impossibly shallow water for them sometimes.


A few thoughts on spring sea-run cutthroat fishing.  Depending upon your fishing location, and time of year, especially ranging from southern Puget Sound to the North Olympic Peninsula waters, or northern Puget Sound, or southern Hood Canal vs northern Hood Canal, or the Pacific coastal rivers, you can have widely varying experiences of the sea-run cutthroat trout that you encounter. I have heard it said, by qualified, science- minded people, that our sea-run coastal cutthroat trout spawn in March and April. And I have heard it said that they spawn from February through May. And I have witnessed cutthroat trout spawning in a small north Olympic Peninsula coastal stream around Thanksgiving. But generally we expect them to spawn a bit earlier in the South Sound, and  bit later in the North sound and North Olympic Coastal waters. From around mid April we see increasing numbers of sea runs in our local Olympic Peninsula waters, and by now they are chasing the fry around in the saltchuck like crazy!
The more that I learn about these fish, the more I realize how little we really know. But one thing I believe, to a degree, is that "it's all true." The divergent nature of information about the life history of sea-run coastal cutthroat trout is not really in disagreement. It's just that the information comes from different areas, at different times, from different sources. And any one of them can be completely correct for one region, and also be off by weeks, or months, for another, more distant area. We have no reason to doubt anyone's words on this.

And the more that you fish for them, in any particular area, the more you will learn- about those fish in that area. They are free to roam. And many of them do roam widely. But the majority of them stay pretty close to their natal streams. This is known as "site fidelity." In some places, I think most places, this can make them vulnerable to over fishing. This is something that the research of the last few years has brought to light. And it certainly explains why they get more selective in their feeding, and more careful about flies and other lures, as the season progresses.

Much of the diversity of the coastal cutthroat trout life history reflects the evolutionary strategies that they have been forced into by geologic events over the millenia, and also by human encroachments on their habitats over the last 200 +- years. Simply fishing for them can change their behavior in the short-term, we see that ourselves as the fish begin to feed more selectively, and turn down what was once your favorite fly or lure. But it's not hard to see that decades of fishing stresses would eventually cause genetic changes, in response to those stresses, that would change their behavior completely. In some ways, the human race has had the greatest negative impact in the shortest period of time. That's how over 90% of the salmon, steelhead and trout habitat has been lost in the Pacific Northwest in the last 100-200 years. They have survived unimaginable stresses.

So what works to catch these fish today, be it a technique or fly, etc., might work today, but not tomorrow, or the next day, or the next week. Once you think you have them all figured out, they will humble you. Most of the best, truly outstanding sea-run cutthroat fishing that I have ever experienced was almost purely an accident. You can plan everything perfectly, and never touch a fish. And you can stumble into a day, and a place, when you catch the fish of a lifetime. And you couldn't have planned for it better if you tried. That's a good thick slice of humble pie. The only sure thing about these fish is that they keep moving.

Yes, of course, go fishing in the saltchuck any time of year. If you're catching robust, strong sea-run cutthroat, that's a good thing. But, if they seem weak, underweight, still in deep spawning colors, and showing abrasion on their lower bodies and fins, lower tails etc., maybe it's time to give that location, and those fish a break.  As the late conservationist  angler and writer Les Johnson said, in his great book: "Fishermen have a way of ruining estuaries."

There are some really good, qualified fisheries people working on seriously researching these wonderful, unique wild trout in our region. And as long as we're going to be chasing them around with hooks, the more that we can learn about them, from the perspective of true biological science, and their life history, habitats, forage species, diseases etc., the better we can manage them, and our fishing, for the future. I hope you'll consider supporting this effort. Here's the link: http://www.coastalcutthroatcoalition.com


We will be back on the water this spring! Just in time for the beginning of another beautiful season of wild sea run Coastal Cutthroat trout fly fishing on the saltwaters and rivers of the Olympic Peninsula, Hood Canal and Puget Sound. Drop me a note or give me a call for details. All trips, casting instruction sessions, public and fly fishing club presentations, and rowboat picnics, must be booked in advance.

I  guide fly fishers on the Olympic Peninsula beaches, rivers and streams. We walk and wade, fly fishing for sea-run Coastal Cutthroat trout in freshwater and saltwater, and in the rivers for trout and summer  run steelhead. This is strictly catch and release, traditional fly fishing only. Lunch, snacks, soft beverages, and use of some equipment is included. I also offer personalized and private fly fishing and fly casting instruction.  I would be happy to help you plan your Olympic Peninsula fly fishing adventures, for beginners through expert anglers. Public presentations, Naturalist guide, Rowboat picnics, Tide Pool and  River trail day trips. Please call, write or email for booking details. Now booking for April through October. Please plan ahead!